Roll up! Roll up! The shining star of madcap mayhem —RHYS DARBY— delivers

out-of-this-world absurdity with his first hilarious mystery-comedy book for kids!

Loaded with unmistakably quirky and random Rhys humour, 12-year-old Buttons McGinty pens top secret scribbles in a collection of extraordinary notebooks, as he

and his friends enter a universe unlike any they’ve seen before. Buttons has been shipped off to Ranktwerp Island Education Fortress for Gifted Lame Unruly Minors, a.k.a. R.I.E.F.G.L.U.M., a boarding school on a remote island, somewhere in the Pacific Ocean between New Zealand and Antarctica. His parents are missing under strange circumstances and there are bogus baddies and a burly bigfoot on the prowl.

In this mind-blowing, laugh-out-loud mystery-comedy adventure, kids will crack the crazy Morse codes and figure out the clues as they join Buttons on a mission to

find his parents, who have been pronounced missing, presumed missing! 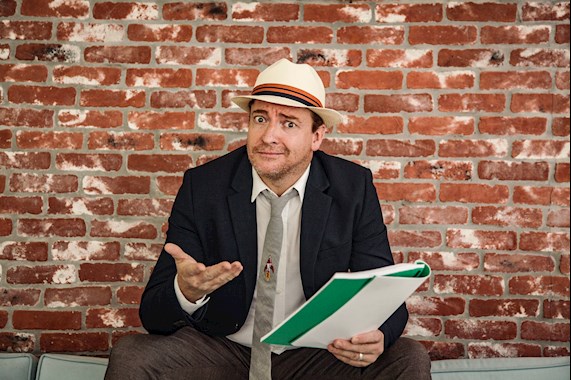 “Working with Rhys was a roller-coaster ride of ridiculousness from the get-go,” says Publisher Lynette Evans. “There was a surprise around every bend, and we couldn’t be prouder to publish this debut children’s book by Rhys, who has poured heart and soul into telling Buttons’ story.”

This is a book that kids (and plenty of grownups) will want to get their hands on! With 192 pages of hilarious words and pictures, this action-packed comedy sci-fi adventure is suitable for readers 8 years and older.

Rhys Darby is an actor and comedian from New Zealand. He rose to fame as the lovable but inept Murray Hewitt on HBO’s Flight of the Conchords. He has gone on to star in films such as Yes Man, Jumanji: Welcome to the Jungle, and his own kids’ favourite, Hunt for the Wilderpeople.

Darby is a regular feature on a number of animations, from Barefoot Bandits, Voltron: Legendary Defender, Star and the forces of evil and the new Thunderbirds Are Go reboot. He is an amateur cryptozoologist and in his spare time hosts a podcast on the subject – The Cryptid Factor. Never far from his standup comedy roots, Darby still treads the boards, bringing his energetic storytelling style to stages all over the world. He grew up in Auckland, and now resides in Los Angeles with his family where he likes to ride his bike and eat tacos. Possibly both at the same time!

Rhys Darby is available for interview