June Pitman-Hayes is a creative writer, singer-songwriter, teacher, lyricist and poet, and has performed at many events and jazz festivals throughout the country.

Brought up on the shores of Tamaterau, a tiny settlement that hugs the Whangarei Heads Coast Road east of Whangarei, June Pitman (or June Hayes as she is known within New Zealand’s music circles) was the youngest of three mokopuna raised largely by her maternal Māori grandmother Tiria (who at the time was in her early seventies), on the whenua known as Pakikaikutu. Tiria and her husband Tame had already raised a large family of eighteen children, and were well into great-grandparenthood by the time June came along.

Born to Māori parents of Ngāpuhi, Ngāti Wai, Ngāti Pūkenga and Ngāti Maniapoto descent, the fair-skinned, blonde-haired June stood out as a bit of an oddity alongside her brown-skinned sister and relations. However, within she carried the essence ‘Māori’ – an eagerness to observe, learn and practice Māori culture and customs, and a desire to embrace those of the Pakeha. In other words, she learned to ‘walk’ in both worlds quite comfortably.

She was also born with a deep understanding of the natural world of the Māori: an affinity with the gifts of Papatūānuku (Mother Earth), Tāne Mahuta (Lord of the forest) and Tangaroa (God of the sea). With ancestral lines linked to the captains of the Tainui, Te Arawa, Takitumu, Mataatua, Kurahaupō waka, and even further back to Paikea of the island of Mauke in the Cook Islands Group, and early ancestral navigator Manaia, June’s whakapapa provides an explanation for such a ‘Te Moananui’ connectedness. While her maternal great-great-grandfather carried the Te Moananui name, June more recently discovered that her paternal great-great-grandfather Rangitira Te Rangi Tuataka Takarei, was instrumental in introducing waka surfing to the Kawhia area!

June’s fondest memories of growing up in Tamaterau are of times when she would sit and watch her grandmother and great-aunt harvest and prepare harakeke for weaving into kete and whāriki (mats).  She learned how to prepare the flax by scraping it with pipi or mussel shells, and how to weave headbands, all the while listening to the two old women chatter away in te reo. (June’s Ngā Puhi hapu is Patuharakeke – the club that beats the flax.)

From her mother Constance June learned many things, including how to make poi, perform poi dance and rakau games, etc. Most important though was Constance’s influence in encouraging her daughter’s natural ability for music and song. June embraced this creative aspect fully in the early 1990s and is now considered to be one of Aotearoa’s best (if not well-known) jazz singers.

Under the guidance of these two women, June learned the intrinsic values of caring for the environment, growing and sharing kai, gathering and sharing kaimoana – respecting the ocean and taking only as much as was needed. She also learned the most profound lesson of all: that of honouring one’s family, one’s self, and extending generosity and respectfulness towards others.

While life has taken her on many different pathways, June has remained closely connected to family, identifies as a Māori woman with a modern-day outlook, and continues to educate herself in tikanga Māori. She looks forward to encouraging future generations to connect or reconnect with their Māori heritage, and to recognise the value of being able to ‘walk freely’ in a Māori/Pakeha/multi-cultural world. To this end she has recently ‘stepped’ up to take on the role of Trustee for Te Tāwharau o Ngāti Pūkenga – representing the people of Pakikaikutu kainga, Whangarei, with a view to bringing about positive outcomes for the whenua that will allow such connections to occur.

June continues to explore her musical pathways, sharing her love of music with a variety of audiences, and teaching singing to the children of Meraki Montessori School, in Silverdale, Auckland. With Scholastic NZ, she has sung on Joy Cowley’s Hush: A Kiwi Lullaby, and is the author/musician of Tāwhirimātea: A Song for Matariki, and Kia Ora – You Can Be a Kiwi Too. She lives at Red Beach, north of Auckland. 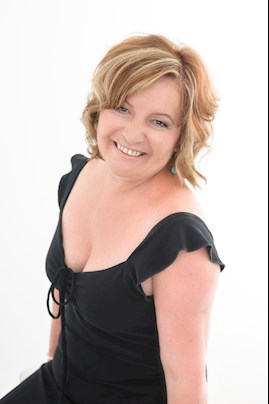 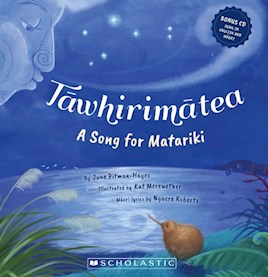 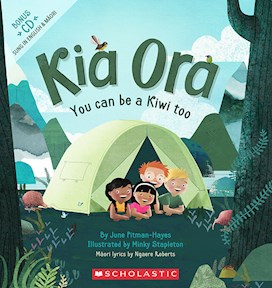