Where did you go to school?

I went to school in a terrible place that I don't like to think about, I'd hate to think anyone would ever associate me with there.

Did you have a nickname?

My mother tricked me into thinking it was 'dress as your favorite computer game' so I went to school in a giant diaper, carrying a bag of rocks. I can't remember what game it was from. On my way to school I got held down by some older kids who wrote 'boo' on the back of the diaper. For years I was called Baby Boo, but I don't really like to think about that anymore.

What were you like in school? What is the naughtiest thing you did?

I was a mix between nerd and bad kid. I did all my work so no-one really noticed when I was doing terrible things. I ran a gambling ring out of one of the classrooms, betting on matchbox car races, I blackmailed the librarian into giving me free photocopying so I could publish my first comic when I was 7, I think those might be the worst.

My favorite stories were Dracula by Bram Stoker and Pierre by Maurice Sendak.

I can answer all three by saying 'The Wild Bunch.'

I honestly don't remember. I know that when I was really young I used to write books about being best friends with Mr McGregor because we shared a hatred of Peter Rabbit, so maybe my inspiration came from a very dark place. I was very excited by the look of The Simpsons and Ninja Turtles as well, I used to collect empty chip packets that had Bart Simpson on them and glue them to my walls. I had to share a room with my beast of a sister and she'd rip anything down that I liked so glue was really the only way.

I love stories. The only thing I have ever stolen is a copy of The Hero With A Thousand Faces when I was 10 or 11 and I must have read it a dozen times. Then one day I realized I didn't have to get a boring job if I got good enough at writing and drawing, so I just never stopped.

Anywhere flat with a bright lamp.

The millions of dollars and the fast cars that I get to draw.

I once had a fan turn up at a convention with his new girlfriend and it turned out he'd told her I'd based one of my main characters on him. He was even wearing the same outfit as the character. That got pretty uncomfortable for everyone involved.

I don't understand this question. That's all I ever do.

Andy Warhol. He's the only person I can think of who liked really boring stuff the way I do.

I should save something for the inevitable 'tell all' TV movie. I suppose I should mention that I'm legally blind, I guess that makes my career in picture drawing a little more impressive (though I'm sure my family would disagree).

Gorillas in Our Midst (and like exactly 200 comics currently, but I'm 2 pages off finishing the next one).

Participation Certificate for the 'Have A Go – Disabled Triathlon.' I feel like I didn't deserve this certificate because I didn't actually participate but it came with a free bottle of Coke. 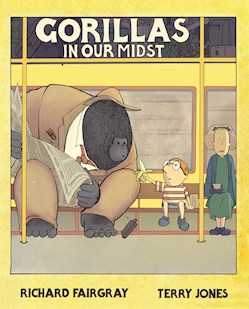